This exercise explains the interactions between Tomcat and Apache, then it will show you how to call and attack an Axis2 Web service. Using information retrieved from this attack, you will be able to gain access to the Tomcat Manager and deploy a WebShell to gain commands execution.

Completed this exercise
Make sure you give at least 512MB of RAM to this VM!

This course details the exploitation of an issue in an Axis2 Web service and how using this issue it is possible to retrieve arbitrary files. Then using this, we will see how an attacker can retrieve Tomcat users' file to access the Tomcat Manager and gain commands execution on the server.

On Unix/Linux systems, Tomcat cannot be run on port 80 unless you give root access to the application server (Tomcat), which is not a good idea since Tomcat does not drop privileges and will be running as root (as opposed to Apache which drops privileges during startup). However, to be available for most users, the server needs to be available on port 80, that is one of the reasons people use Apache to "proxy" the request to Tomcat. This configuration can also be used to:

The Apache and Tomcat servers can be on the same server or on different servers, this can be confusing once you gain commands execution on the Tomcat server and realize that its configuration does not match what you see on the Apache's end.

There are two common ways to "proxy" requests from Apache to Tomcat:

You should look into CVE-2007-0450 and CVE-2007-1860, these vulnerabilities impact old versions of Tomcat/mod_jk and can potentially allow an attacker to gain access to the Tomcat Manager even if it is not directly exposed by Apache.

Here, the page's title gives away that Tomcat is involved in this web stack, however, the HTTP headers only give information on the Apache server in front of it:

Axis2 is a project from the Apache Foundation, it allows developers to create Web services in C and in Java.

By default, Axis2 gets deployed in /axis2/ (when developers use axis2.war), you can easily retrieve a list of the available services by visiting the page http://vulnerable/axis2/services/listServices: 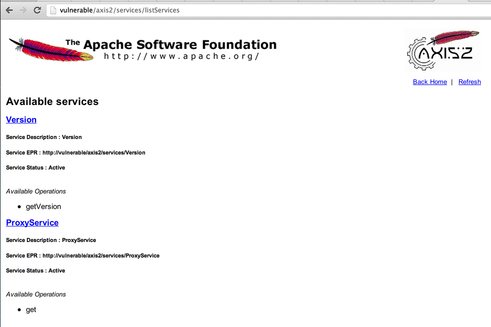 If we did not know that the server was hosting a Web service using Axis2, we could try to use a directory buster like wfuzz to find out. However, wfuzz's default words lists don't contain axis2, that is why it is always a good idea to keep your own list with paths of common applications and frameworks.

Retrieving information from the WSDL

The Web Services Description Language describes the functionalities offered by a web service. A WSDL description of a web service (XML based) provides the methods that can be called, what parameters they expect and what values they will return.

The WSDL information can be accessed by clicking the service's name in the listServices page or directly using the following URL: http://vulnerable/axis2/services/ProxyService?wsdl.

You can find a list of methods by searching for the keyword operation in the portType section of the WSDL. In this file, we can see that only one operation is defined (get):

This operation is defined multiple times in the file for each different way to access it. We can see that this get operation uses a tns:getRequest and sends back a tns:getResponse. We are mostly interested by what the need to send to the service.

Above the operation declaration, we can see that the getRequest used:

Gathering this information is mostly a guess work and will depend on the WSDL file created by a given framework/tool, however, we now have everything we need to call the Web service.

Axis2 provides an easy way to call Web services, you just need to follow the pattern http://[WS_URL]/method?parameters. In our example, we can use this to call our Web service:
http://vulnerable/axis2/services/ProxyService/get?uri=https://pentesterlab.com/. We can see that the return value is the homepage of the website PentesterLab.

For complex Web services (like Web service with complex parameter types), it is better to generate a client using Axis2.

From my experience, it is often (always) better to use the same library used by the server to limit any problem of interoperability between two libraries written in different languages or using different specifications.

You can find more information on how to generate a client using Axis2 by following the documentation on the Axis2 website: http://axis.apache.org/axis2/java/core/docs/userguide-creatingclients.html.

We can see that this Web service uses the URL provided to retrieve content and echoes it back in the response. The easiest way to do that is the URL class in Java. We can probably use the URL class behavior to get more than just a website content...

The URL class can also be used as a port scanner if the developer didn't limit the ports you can have access to. You can try to access http://vulnerable/axis2/services/ProxyService/get?uri=http://localhost:22/ to see what version of OpenSSH is used.

The Java URL class is a really handy class that allows a developer to fetch and retrieve content. This class supports the following protocols:

The first example is the most common use of this class and often used as a proxy to retrieve resources and bypass the same origin policy. The file:// is less known and allow an attacker to retrieve arbitrary files on the file system (limited by the application server privileges).

We can exploit this behavior to retrieve the /etc/passwd by accessing the following URL http://vulnerable/axis2/services/ProxyService/get?uri=file:///etc/passwd and we can see the content of /etc/passwd in the response:

You should try to setup Apache and Tomcat using mod_jk and try to create a simple Axis2 HelloWorld Web service or an Axis2 Web service that returns the current time. You can check the configuration of Apache, Tomcat and Axis2 on the ISO to get an idea on how to do it.

Introduction to the Tomcat Manager

The Tomcat Manager can be found at the following URL: http://vulnerable/manager/html.

Tomcat Manager can be used to deploy web applications to Tomcat. Tomcat Manager is protected by a password and should not be installed on production servers.

The file containing the password is named tomcat-users.xml and is stored inside $CATALINA_HOME/conf/ on most systems. This file looks like:

Debian has its own way of installing most software and tries to put configuration files in /etc. Tomcat installed through Debian's packaging system will follow this rule and the file tomcat-users.xml will be stored in /etc/tomcat6/ (for the current version of Debian stable).

We can see here that users have a role, it's a really important part of the Manager application since you will need a user with the role manager (for version before 6.0.30) or manager-gui (for later version) to access the manager and deploy an application. Other "manager" role can also be used but the deployment is more complex.

For example, if you log in using tomcat with the password tomcat, you will get an HTTP 403 response: 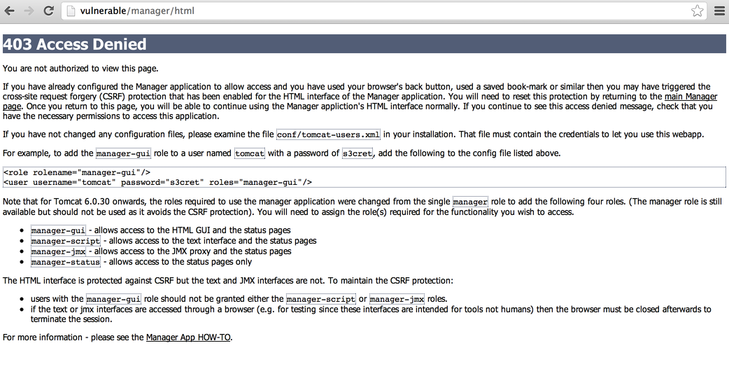 In the past, the following accounts were common:

On Debian, by default, the tomcat-users.xml file is located in /etc/tomcat6, the version retrieved previously confirms this. Using the vulnerability discovered in the Axis2 Web service, we can retrieve this file.

If the file was stored somewhere else, you can either brute force the path or try to gather more information on the application to find where Tomcat is located on the system.

By default on Debian, this file can only read by root and the member of the group tomcat6, but since the directory traversal gives us the same access as the tomcat server, we can read the content of this file. It's possible to retrieve tomcat-users.xml by accessing the following URL: http://vulnerable/axis2/services/ProxyService/get?uri=file:///etc/tomcat6/tomcat-users.xml. You can then retrieve the password of the manager user and access the Tomcat Manager.

In this section, we are going to see how we can build and deploy a Web Shell to gain command execution on the server.

We can now create a directory name webshell and put our file (index.jsp) inside it:

Now we can build the war file using jar (provide with java):

Our Web Shell (webshell.war) is now packaged and we can upload it using the Tomcat Manager.

To deploy the Web Shell, you just need to select the war file you just created and upload it to the server using the Manager. The section of the page used to deploy a new web application allows you to directly select your war file:

Once the Web Shell is deployed, you should see it in the Manager: 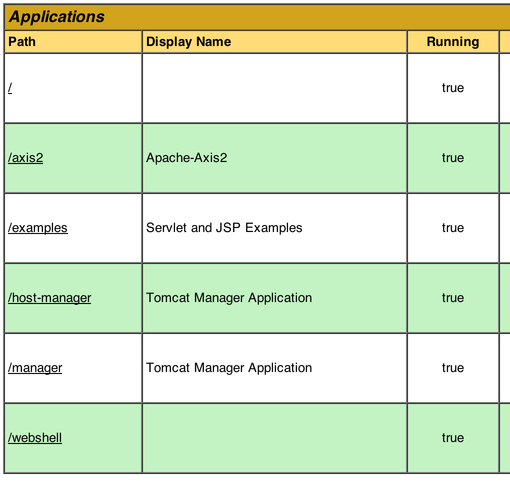 You just need to click the link to access it and you can start running arbitrary commands:

This exercise explained how to get access to an Axis2 Web service and how the Java URL class can be used to retrieve arbitrary files if no checks are performed on the protocol in use. Once you can retrieve arbitrary files, you can target configuration files to gather sensitive information and passwords. Once you have credentials, you can easily access the administration interface of the application server and deploy a custom web application to run arbitrary commands on the system.