This exercise covers an attack against CBC mode. This attack can be used to decrypt data and re-encrypt arbitrary data

Between 1 and 2 hours
average
completion
time

CBC is an encryption mode in which the message is split into blocks of X bytes length and each block is XORed with the previous encrypted block. The result is then encrypted.

During the decryption, the reverse operation is used. The encrypted data is split in block of X bytes. Then the block is decrypted and XORed with the previous encrypted block to get the cleartext. The following schema (Wikipedia) highlights this behavior:

Since the first block does not have a previous block, an initialization vector (IV) is used.

As we saw, the encryption is done by blocks of fixed size. To ensure that the cleartext exactly fit in one or multiple blocks, padding is often used. Padding can be done in multiple ways. A common way is to use PKCS7. With PKCS7, the padding will be composed of the same number: the number of bytes missing. For example, if the cleartext is missing 2 bytes, the padding will be \x02\x02.

Let's look at more examples with a 2 blocks:

When an application decrypts encrypted data, it will first decrypt the data; then it will remove the padding. During the cleanup of the padding, if an invalid padding triggers a detectable behavior, you have a padding oracle. The detectable behavior can be an error, a lack of results, or a slower response.

If you can detect this behavior, you can decrypt the encrypted data and even re-encrypt the cleartext of your choice.

If we zoom in, we can see that the cleartext byte C15 is just a XOR between the encrypted byte E7 from the previous block, and byte I15 which came out of the block decryption step: 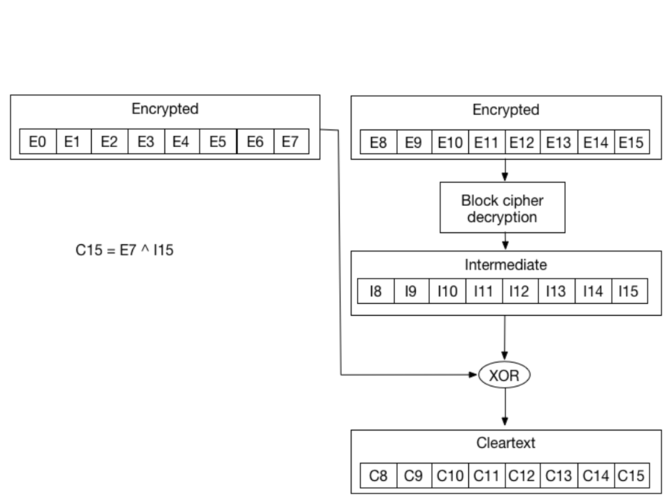 This is also valid for all other bytes:

So we are able to compute I15.

After brute force E6, to find the value that gives us a valid padding E''6, we can re-use the formula:

Using this method, we can keep going until we get all the ciphertext decrypted.

Detection of the vulnerability

Now, if you try to modify the cookie, you can see that you get an error from the application.

To ensure you get a good understanding of this attack, it's strongly recommended that you write your own tool.

To do, it's recommended to work locally. For example, the following code can be used to create a padding oracle in Ruby:

This exercise showed you how you can tamper encrypted information without decrypting them and use this behavior to gain access to other accounts. It showed you that encryption can not be used as a replacement to signature and how it's possible to use a padding oracle to decrypt and re-encrypt information.